A contemporary residence project that investigates post lockdown housing and working experiences is going to see the light in Milan. The idea came out and developed right in the months of the Covid-19 emergency, between Rome and London, as the result of the creative mind of Claudia Campone, founder of the ThirtyOne Design studio. Reconsidering domestic spaces and their functionality is the goal of the project: in an apartment on the third floor of a 1930s building in via Teodosio 15 in Milan, the concept starts with the involvement of a selection of partners, including Abet, which will contribute to reflection on new models of living. The space will be inaugurated in late November.

“This is a homeworking concept that I worked on in the lockdown phase of this spring. In light of this experience, completely unexpected and unprecedented, I imagined how I could rethink the living space in an attempt to convey responsible behavior: this is in fact for me the true meaning of the word sustainability, not only the environmental impact intended as emissions harmful in the eco-system in which we live, but the impact that our design activity can and must determine on the use and use of spaces”.

Why the choice of the house as a design dimension?

“The house returns to its primary function of refuge and safe shelter from the external world now perceived in an ambivalent way: in it we withdraw as a snail does in its shell. And with the same formal dynamic of the carapace we inform the architectural space with the actions of those who live there. By overturning the existing scheme of separate spaces, we introduce a central volume that articulates and determines the different functions of living, naturally fluid and necessarily interconnected. In this way, natural light is free to spread inside, promoting a state of well-being in the voids filled by the physical presence of the inhabitant”.

What are the main elements of innovation?

“The main innovation is the vestibule: a volume-filter with the double sanitizing function, thanks to the small sink and the changing room, and locker in which to be able to receive deliveries safely and without interaction with the rest of the home: a box filter inside the housing box”.

Why did you choose for PostHome?

“The choice of laminate was born together with the idea of volumes: the full colors of Abet’s very rich range allowed us to compose a chromatic selection that paid homage to the masters of the Modern Movement. In fact, the building that hosts us is a small jewel of those years, with an unusual dark green facade and a geometric interweaving of frames and overhangs, whose harmony does not escape the attentive observer. In the design phase we therefore benefited from these teachings that we inherit from the artistic and architectural movements of the time: color as the language of Sonia Delaunay and the spatial relationship between volumes and surfaces by Charlotte Perriand. In the compact space of PostHome, each function is easily recognizable and visually harmonized. Not only the chromatic performance, but also the familiarity that over the years the general public has been able to build with laminate surfaces that especially in our country have written important chapters in the history of design, has allowed us to insist on the reassuring idea of shell by defining a project not intended for the lucky few, but for the real public who seeks housing quality and recognizes the value of designing with efficient and sustainable investments”. 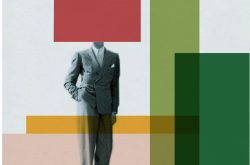 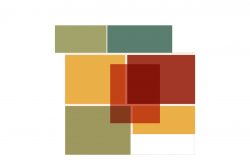 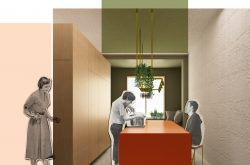 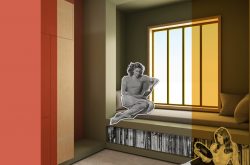 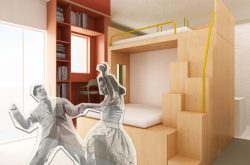 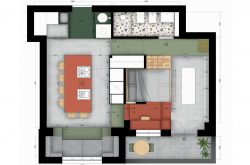 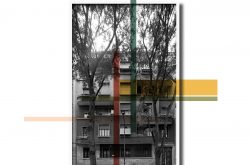 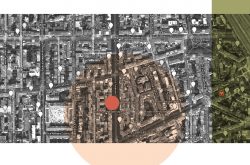 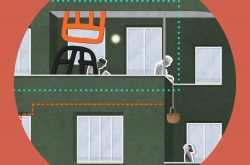